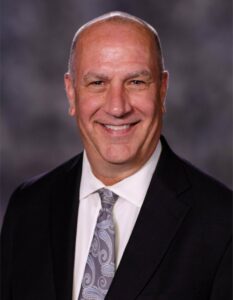 Dr. Paul Gausman joined Lincoln Public Schools as superintendent on July 1, 2022. Prior to coming to Lincoln, he was the superintendent for the Sioux City Community School District for fourteen years. During that time, the school district saw significant gains in academic achievement and the graduation rate. In December 2021, superintendents from across the nation elected Dr. Gausman as president of the Urban Superintendents Association of America.

Being honored with a wide variety of awards and distinctions, Dr. Gausman was named a 2018 finalist for National Superintendent of the Year by the National Association of School Superintendents. He was also awarded Iowa Superintendent of the Year in 2014. During his tenure, the Sioux City Community School District was twice named a District of Distinction by District Administration Magazine – first in 2015 for its Preschool Initiative and again in 2019 for the school district’s work on the Sioux City Career Academy. Under Dr. Gausman’s leadership, Sioux City Community School District was also identified as one of the 100 original Future Ready Districts in the nation and a Next Generation High School District by the United States Department of Education and the White House. In addition, Dr. Gausman stepped into the national spotlight through the documentary “Bully,” which was presented to the White House in 2012 and highlights his ongoing work on school safety through school-based bullying and cyberbullying prevention efforts.

During his time in Sioux City, Dr. Gausman oversaw the educational process for approximately 15,000 students and the work of nearly 2,500 staff members in 25 student attendance centers. The district celebrated many accomplishments during his time there, including implementing the largest one-to-one student computing initiative at that time in the State of Iowa; putting into place progressive programs through Specialty Elementary Schools, Middle School STEM-focused exploratory offerings, and over 30 Pathways to the Future in Career Academy High School offerings. As a result, Sioux City’s graduation rate is greater than 90%, and the educational team delivers some of the most progressive programs in the nation to prevent school-based bullying.

Prior to his work in Sioux Falls, Dr. Gausman was formerly the superintendent of schools for the West Central School District in South Dakota. His past administrative experiences also include those as coordinator of middle school education and coordinator of fine and performing arts for the Sioux Falls Schools in South Dakota. In addition, Dr. Gausman’s teaching experiences include those as director of bands at Millard West High School in Omaha, Nebraska, and marching percussion instructor for the University of Nebraska-Lincoln, Cornhusker Marching Band.

In addition to his superintendent duties, Dr. Gausman serves as a performing artist and clinician with the Yamaha Corporation of America in percussion, is a consultant with McPherson and Jacobson Executive Recruitment and Development, and also a consultant with Guidepoint Global Market Research.

Business as usual at Lincoln Public Schools has always been open and transparent. LPS protocol calls for posting these contracts on our website as attachments to the Lincoln Board of Education meetings when the contracts are considered and finalized. We also report the finalized contracts in additional documents posted on our website.

Lincoln Public Schools is seeking to engage citizens throughout the community to help refresh and develop a strategic plan to chart the course for the school district over the next five years.