One hour at Meadow Lane, a lifetime of lessons

A recent visit to Meadow Lane Elementary School, located just east of 70th and Vine streets, offered a glimpse into how much can be accomplished in one hour within Lincoln Public Schools.

There were engaging and thoughtful reading and math lessons that will lay the foundation for future success inside the classroom. There were lessons about trust and teamwork that will prepare students for a lifetime of success within school walls and beyond. 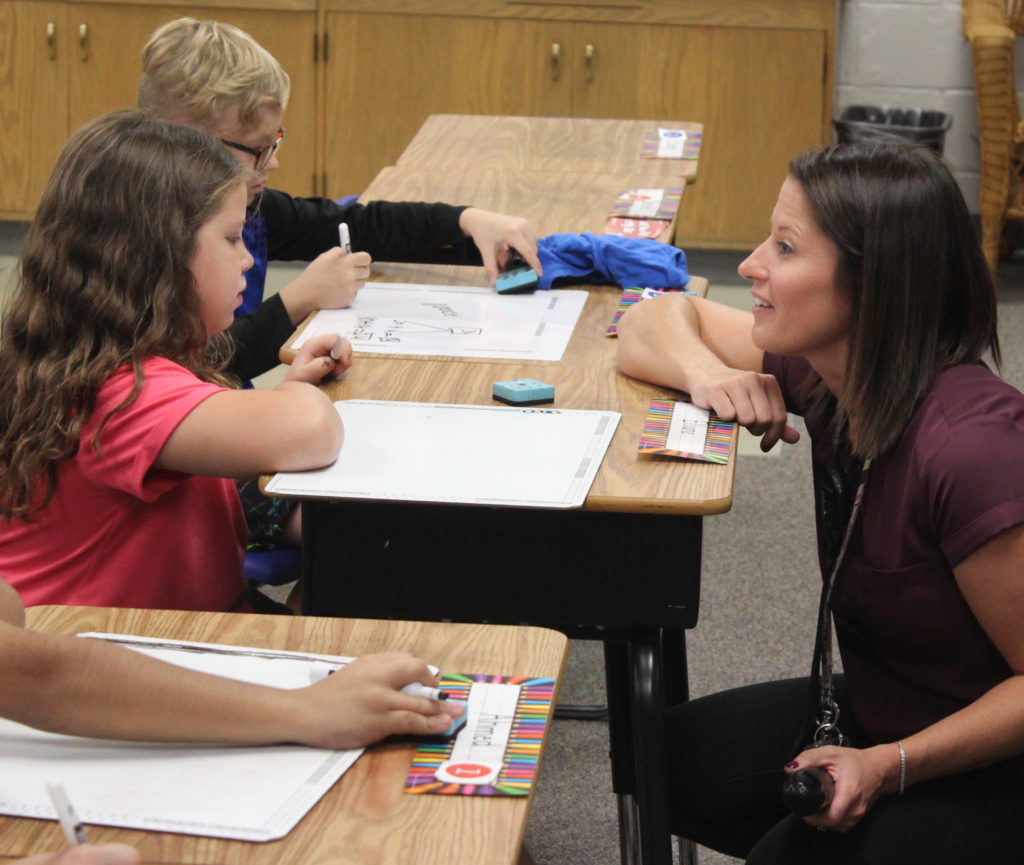 As Patti Hall’s second-grade students settled in for the day’s math lesson, she reviewed their objectives and strategies for the day, which were written on the whiteboard. In unison, they read them aloud: “Today I will…use strategies!…so that I can…represent numbers!…and…explain my thinking!”

She asked the students to discuss with their neighbors the various strategies they’ve learned to represent numbers. After 20 seconds or so of small-group chatter, Hall wrote a problem on the whiteboard for them to represent: How many tens and ones are in 24?

Hall and her students went on to discuss and practice three strategies they could use to represent the number 24: they could use math drawings; they could write math equations; and they could use their words. Students offered examples of those strategies. Some went to the front of the class and wrote on the whiteboard. There was a hiccup or two along the way, but classmates offered feedback in a way that could be a model for people of all ages, filled with phrases such as “I have a question” and “thank you, that makes sense.”

In my classroom, especially during math, we focus on exploration of math and having a growth mindset where mistakes help our brains grow. 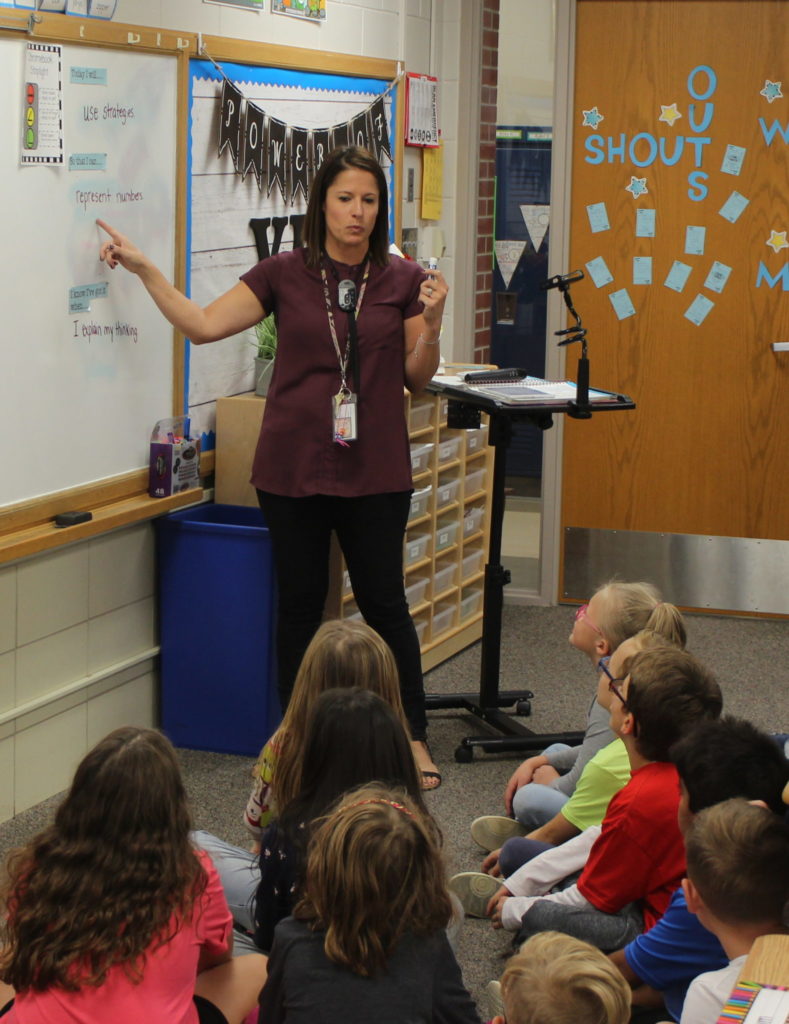 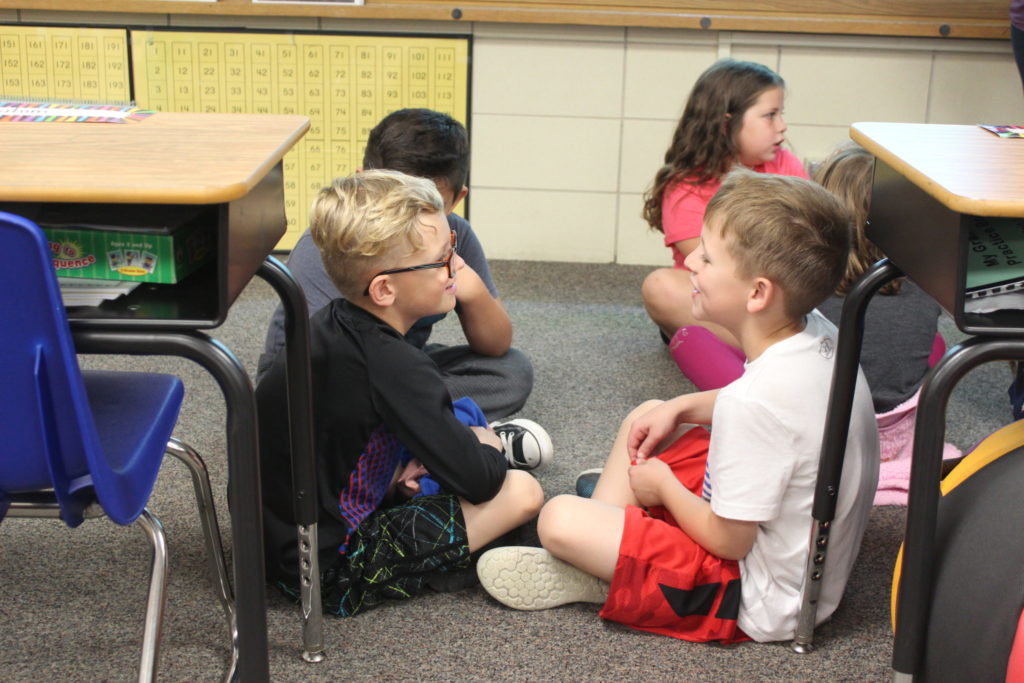 At one point, students returned to their desks to draw a picture that showed 20 groups of ten. Hall and the class then reviewed one of the student’s drawings projected on the whiteboard. They counted the 20 groups of ten and reached a total of 200. They discussed that two tens equals 20 and that 20 tens equals 200. They talked about the importance of using a math drawing – one of their strategies – to explain their thinking. In the case of representing the number 24, they could use the image of two groups of ten and four ones.

“In my classroom, especially during math, we focus on exploration of math and having a growth mindset where mistakes help our brains grow,” Hall said afterwards. 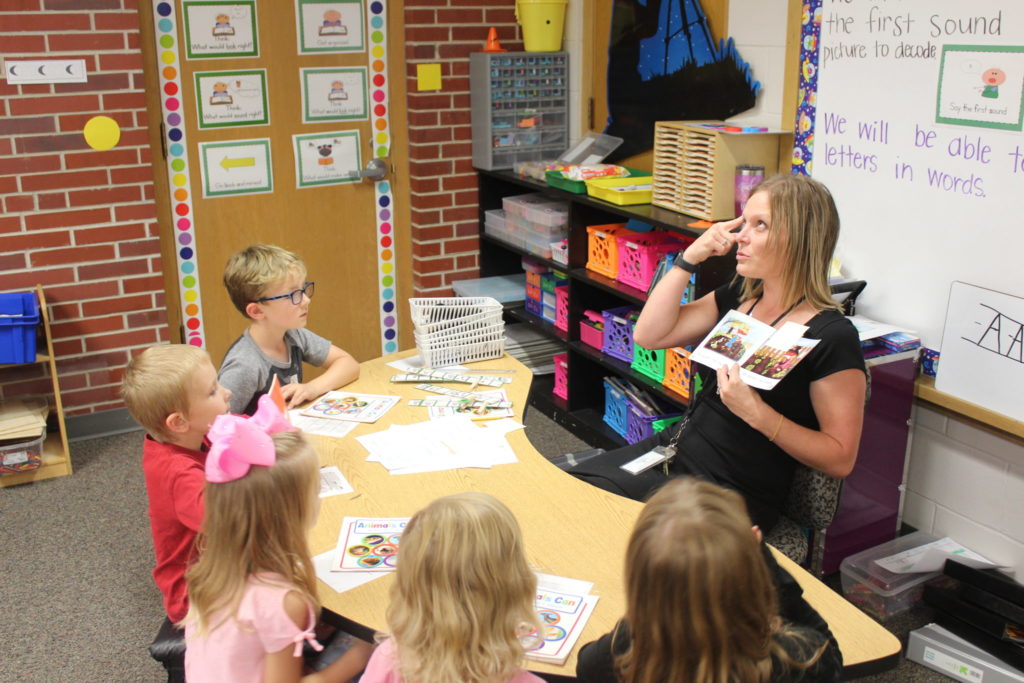 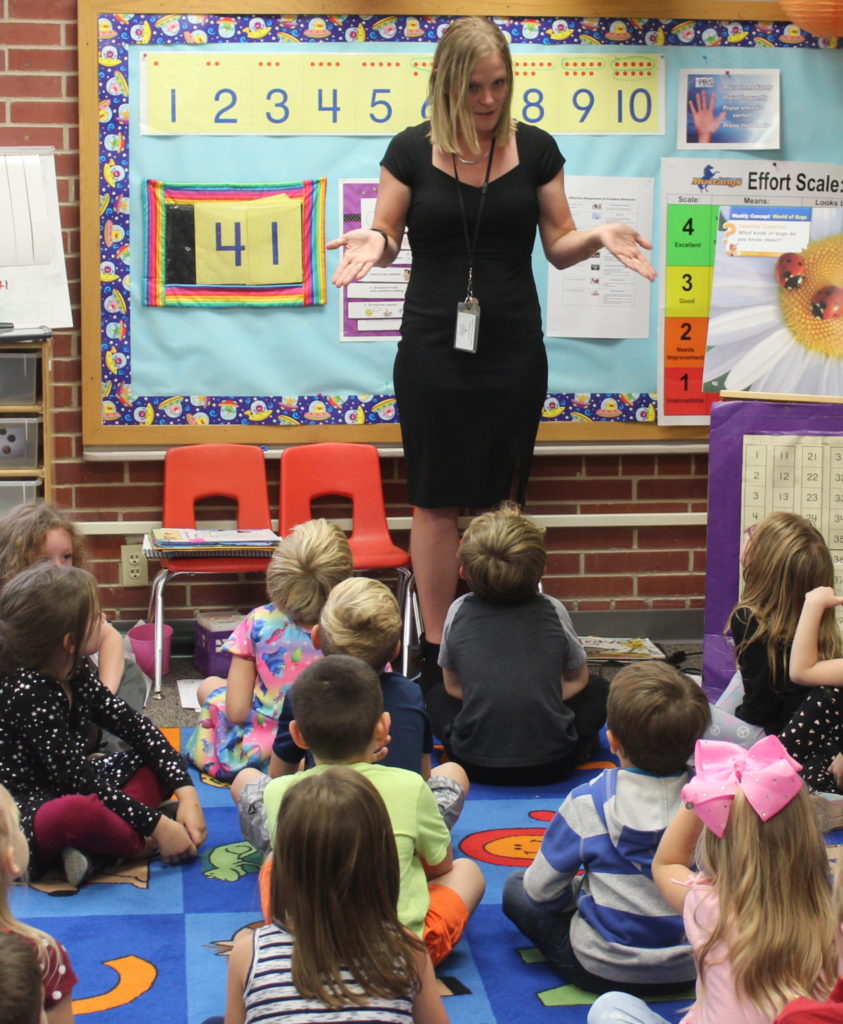 Down the hall, Chantelle Schroeder was leading a guided reading lesson with five of her kindergarten students.

Guided reading is an integral part of elementary instruction in LPS. In grades kindergarten through second, for example, each teacher has three to four guided reading groups and meets with each one daily. The students in each group have similar instructional needs, allowing for the teacher to plan a lesson that specifically targets the needs of the group. The groups are flexible, allowing for students at any time to move to a group that better matches their needs.

On this day, Schroeder and her students were starting a new book, “Animals Can,” about the different ways that animals move.

“But first let’s look up here at our learning targets,” Schroeder said, pointing to a small whiteboard behind her. “It’s the same one we had yesterday. Can you read it?”

Schroeder and the students read them aloud, “We will be able to use the first sound and check the picture to decode those words that we don’t know.”

“Now what can we do if we don’t know that word?” Schroeder said, referring to “hopping.” “That’s right, we can say the first sound and look at the picture.” 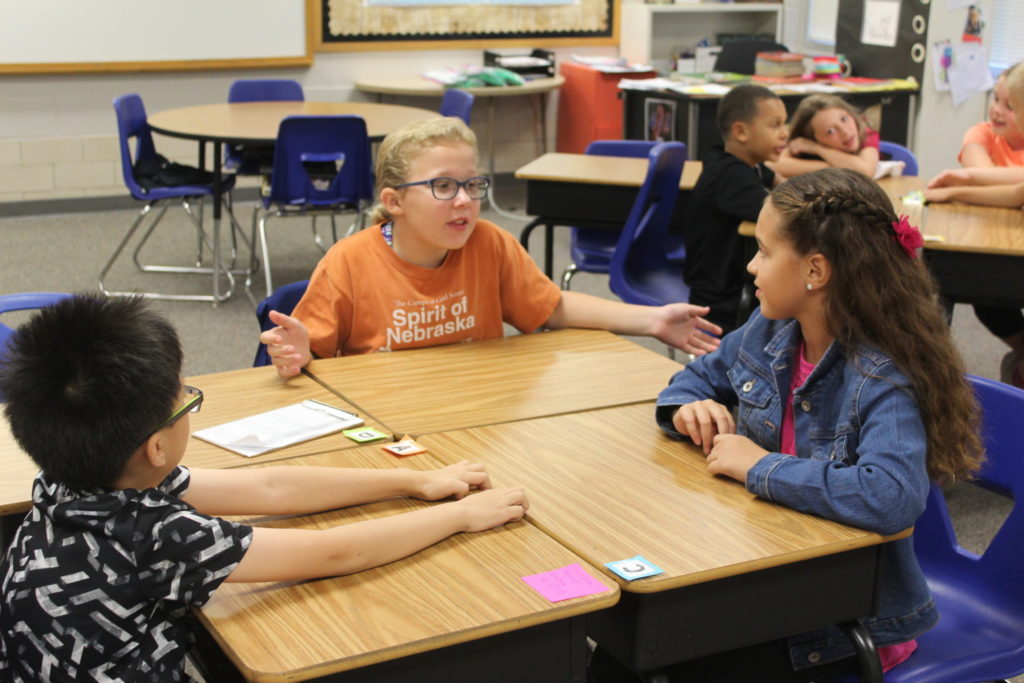 Down another hallway, sitting in one corner of Angela Burkey’s fourth-grade classroom, is a three-legged stool. On the top of the stool it reads “Trust” in large letters, along with the following three principles:

Burkey uses the stool as a tangible metaphor for how important trust is within a team. The stool represents her class. The stool legs are the three principles of trust. If one of those legs are weakened, the entire stool can collapse. If one of those three principles of trust are weakened, the class can’t function as a team and students can’t reach their full potential.

Burkey thought of the stool idea four years ago after attending a conference prior to her first year of teaching. She had someone build her a stool with detachable legs.

“It’s more tangible for students to understand. I use it at the beginning of the year to help establish our team culture,” Burkey said. “We do activities every year that help each person keep the trust stool standing tall. It’s a goal for each class to not break it. If it’s broken, it’s a big deal in our room.” 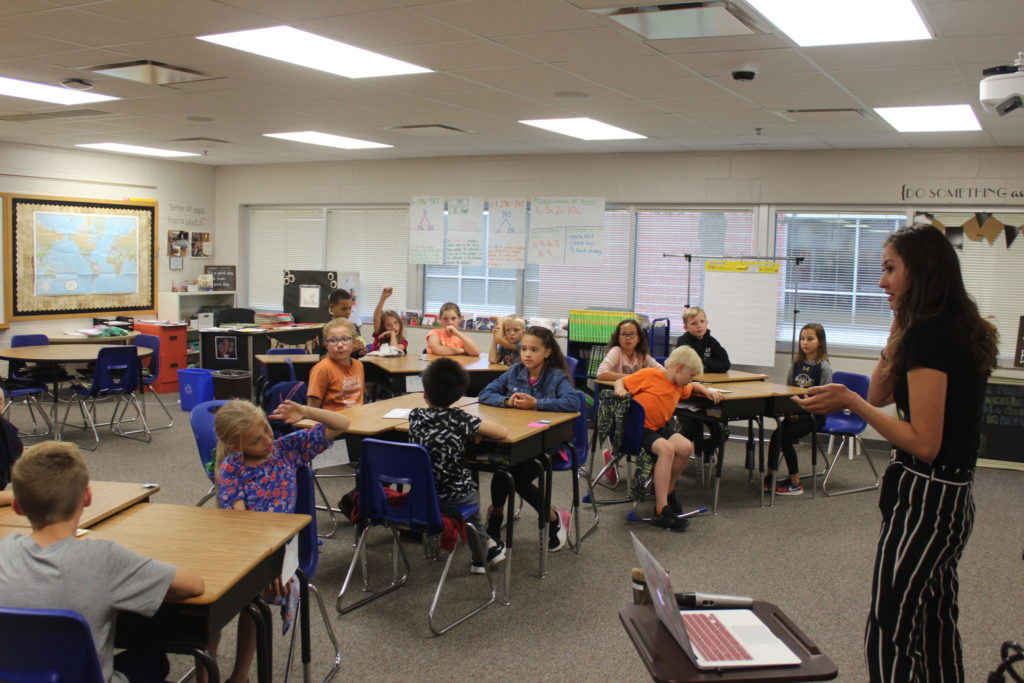 On this day, Burkey asked her students to discuss in small groups what the word trust means to them. Afterwards, they shared their thoughts.

One boy related it back to the stool, standing as a sturdy reminder in the corner.

“If we don’t have concern for others, if we don’t keep promises and if we don’t do our job, the trust stool can’t stay balanced.” 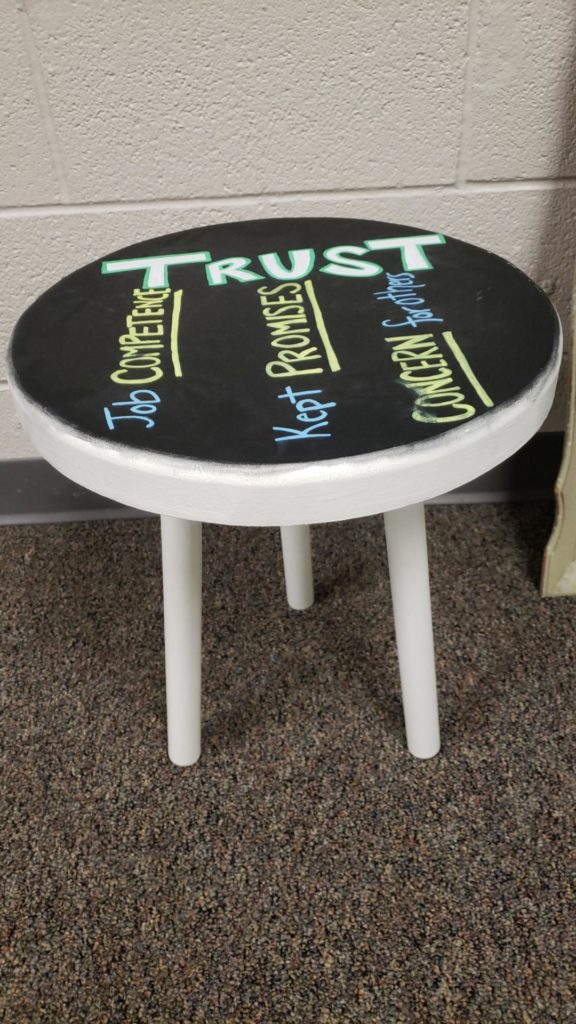 If we don’t have concern for others, if we don’t keep promises and if we don’t do our job, the trust stool can’t stay balanced.